Recently, I had the opportunity to ask Jason Gurley a few questions about his upcoming release Eleanor. Jason is the author of the bestselling novel Greatfall and designer of covers for other bestsellers like Hugh Howey, Russell Blake, Michael Bunker, Ernie Lindsey, and Matthew Mather, among others. Personally, I’m stoked for the release of Jason’s latest novel. If you haven’t had a chance to read any of his works, I highly recommend one of his short stories, The Dark Age. In that short story alone (entirely worth the meager $0.99), you’ll get an excellent sense of what Jason can do to you with his words and you’ll see why I’m looking forward to getting my hands on a copy of Eleanor. Jason’s storytelling has the power to immerse you into fantastic, vast worlds, and make it deeply personal. His characters are vivid, realistic, and you cannot help but empathize with them, whether they are post-apocalyptic marauders or the lone caretaker of an orbiting space station.

Eleanor is a work that’s been marinating in Jason’s mind for thirteen years and is finally just about done with its time in the oven. Before Jason finished Eleanor, he wrote a collection of novels and short stories, telling captivating stories and honing his craft. It’s all led to this point. You can tell that this is one of those novels that has every inkling of being one to permeate through your thoughts long after you’ve read it. Just check out Jason’s interview to see why: 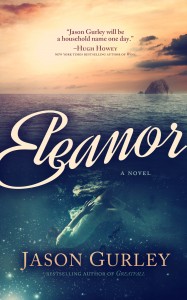 You were inspired with the idea to write Eleanor thirteen years ago on a drive from Oregon to Nevada. How have the changes in your life over those years impacted the story and characters in Eleanor? How have you evolved as a storyteller and writer in that time?

Well, the inspiration for the book came out of a whole lot of big questions I was wrestling with at the time. I was twenty-three, and I was starting to question my belief system. The book, as it turned out, was a great way to investigate those questions by confronting them head-on. The original storyline for Eleanor was much, much different than it is now. Way back then, it was the story of a girl who may have met God while in a coma — and about what it’s like waking up to the real world after that experience. The book was, in short, my way to try to figure out if I believed in any kind of god anymore.

But I struggle less with that question now. I was a kid then, I’m a slightly more growed-up kid now, and I don’t really need to put that kind of pressure on the book. It’s not fair to the book, really, but it was an honest mistake. As soon as I admitted to myself that I wasn’t really struggling with the God question anymore, I was able to deconstruct the book and go hunting for its real story — which turned out to be something so much more interesting, and, I think, infinitely more compelling.

The book is about… consequences. It’s about how the decisions that a person makes when they’re young can ripple through time, and set your descendants on an impossibly difficult path. That’s what Eleanor’s struggling with — how to pull a little heaven out of hell. How to undo things she isn’t responsible for, to restore a little peace and happiness to the people she cares for.

Much of your work is post-apocalyptic. How does Eleanor contrast with these other stories and novels? How does it feel as a writer to depart from these type of works?

Who said I departed from them? Eleanor is a much bigger story than I think anybody thinks. (Well, except for the few people who have read the book already, obviously.) In a way, you might say that this book is the apocalypse novel to end all apocalypse novels.

Except that sounds a little… overconfident.

I write stories about people facing big endings, and I’ve always been fascinated by the emotional toll that the end of the world might have on a person. Eleanor continues that trend, but in a much bigger and very different way than anything else I’ve written.

What do you think would have been different if you had written and called the novel finished thirteen years ago?

I think I’d be disappointed in myself now, actually. I’m happy to leave all of my early work in a drawer. I’m grateful that none of my first novels ever saw the light of day. It’s hard to live down a bad story, and for me, at least, it was hard to write a good story until I’d grown up a bit. I think Eleanor would have been a much more derivative, more predictable novel if I’d finished it a decade ago.

What about if you waited another thirteen years and published this in 2027?

Oh, man. Don’t even talk that way! Eleanor would probably be the equivalent of a serial killer’s bedroom wall at that point — crazy mutterings scratched into the paint, stalkery photos tacked up everywhere, big Xes drawn over people’s eyes, red yarn tying a bunch of push-pins together… Yeah. Let’s not go there.

What makes now the right time for you to push this story out into the world?

Well, it’s done. It’s done, and it’s right, and it’s time to let it test those wings. And frankly, there are a lot of other stories I want to write. With Eleanor finished and almost out, I can start thinking about those.

I can also relax a tiny bit, and rest my poor, aching brain.

According to your blog posts, it seems this year has been exceedingly productive in completing Eleanor. Are there any particular reasons why?

The sheer joy of seeing my work being read. In early 2013, I published a novel that I wrote during a short break from Eleanor. Sixty-four people bought it, which was magical. It felt really amazing to know that strangers chose to read my book, and some of them seemed to like it. So I extended my break from Eleanor, and I wrote three more novels and a whole lot of short stories. Most importantly, this reminded me that I know how to finish things. I was able to come back to Eleanor with renewed purpose, and as it turns out, a lot of people who read my other stories are almost as excited about Eleanor as I am.

In the excerpt that you’ve released (and from the cover art), it appears that swimming, water, and the ocean play a significant role in the story. Are there any particular life experiences that draw you to the symbolic power of water and the ocean?

When I was a kid — probably five or so — my grandparents came to Alaska to visit my family. We all went camping next to the Russian River. I had a fishing rod — one of those kid-sized ones, with Snoopy printed on the reel. My grandfather showed me how to cast, and when he let me try it on my own for the first time, I threw the rod into the river, and leaped in after it… and off I went, bobbing down this river while my mother chased me on the bank.

That’s my only significant water experience. It doesn’t really have that much to do with the story, though, I guess.

But: this is a novel about time. The first page of the book is a quote from a character in the book. It says Time is a river, and it flows in a circle. This book is thoroughly saturated with water and its meaning, from the very first page to the very last. It’s a very, very wet book.

Is there anything else you’d like to pass on to myself or other readers before Eleanor is released on June 27?

Eleanor does come out on June 27, after thirteen years of hard work. And I would love it if everyone who reads this would preorder a copy of the book, and support indies like me whenever possible — but I also want to point out that anybody who signs up for my newsletter in the very near future is going to get a free advance copy of the (Editor’s note: You can join Jason’s newsletter, The Movement, here. Also, you can pre-order a copy of Eleanor here.) The most important thing to me is that this story has a fighting chance to be read by as many people as possible, so I’ll be giving it away to a lot of readers… and hoping that they love it enough to share it with others.

Also, I hope it’s good, and that people really enjoy it!