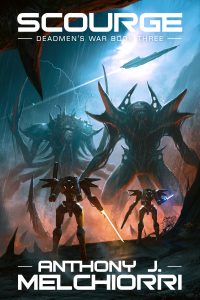 The key to saving humanity—or dooming it—is in the hands of the enemy.

Veteran mech operator Sergeant Major Shaw spent his career fighting huge monsters known as Sentinels. He never expected that he would be piloting them.

But as a new war unfolds, Shaw finds himself and his team using this unorthodox technology in a desperate attempt to save the New World Republic from destruction. The Principality of the Seven Sons has control of an ancient Progenitor dreadnaught rumored to have the power to enslave and destroy empires. No one is safe.

Not even Shaw and his Deadmen.

The Principality has resurrected the worst of the Progenitor weapons, infecting entire planets with a bioengineered disease called the Scourge. With the Scourge and the dreadnaught poised to destroy the NWR, the fate of mankind is dark.

There is only one hope for survival. One mission so dangerous, so impossible that only a single team is suited for it. The Deadmen.