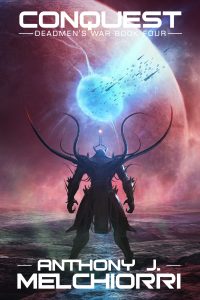 In an attempt to save the New World Republic, they have become the hunted.

Sergeant Major Shaw and the Deadmen command the only known weapon, the dreadnaught, capable of thwarting the impending collapse of the human race. And their enemies in the Principality know it.

The Republic’s farspace planets struggle against the spread of the biological weapon known as the Scourge. One by one they are falling prey to the devastating alien disease.

Taking advantage of the Scourge calamity, the Principality embark on a brutal conquest to rule all of humanity. The only hope of preventing the Principality’s subjugation of the free worlds rests in Shaw and the Deadmen delivering the dreadnaught safely into the Republic’s hands.

But when the Deadmen become trapped on a Scourge-infested planet, the mission becomes more difficult than they anticipated. Especially with the arrival of Principality forces stronger and deadlier than they have ever faced.