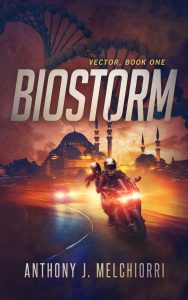 Alex Wolfe is an elite agent with the CIA. He has a proven track record of stopping international bioweapons programs. Skylar Cruz is a skilled Marine whose battlefield injury sidelined her from serving her country. When they’re recruited for a brand-new covert op group, Vector, combating biological and chemical weapons threats, their first mission had better be a success. Because it’s not just their careers at stake. It’s all of humanity.

Wolfe and Cruz embark on a deadly race against bands of mercenaries and diabolical government forces through the bustling markets of Istanbul to crime-infested Russian port cities and Vietnamese jungles hiding forgotten conspiracies. Only they can stop a rampant airborne bioweapon unlike any the world has ever seen.

Danger is in the air. Literally.

Biostorm is the first book in the Vector series, where high-octane action and suspense collide with real science and technology.

“A soaring terrorism thriller that is as cinematic as it is breathtaking. Highly recommended … Fans of Brad Thor and Dean Koontz will love Biostorm.” – BestThrillers.com

“Biostorm kicks off with a wildly entertaining chase through the streets of Istanbul and just continues to build intensity through the finale. A riveting thriller, full of shocking twists and ripping action…guaranteed to keep you turning the pages.” – Steven Konkoly, USA Today, Wall Street Journal, and Washington Post best-selling author of the Ryan Decker and Alex Fletcher series

“Non-stop action drives a cleverly woven plot is perfect for those who love Michael Crichton’s blend of plausible science fiction and masterful action-adventure. Alex Wolfe and Skylar Cruz are the heroes we need. Melchiorri has forged a brilliant start to a new world and I can’t wait to read more. Well-researched and eerily realistic it will have readers clamoring for more and fearful of what comes next. ” – Tom Abrahams, award-winning journalist and author of The Scourge and The Traveler series