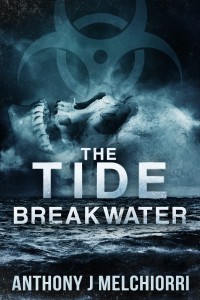 Book 2 in Anthony J Melchiorri’s The Tide series.
The tide has turned against humanity…

Governments across the globe have failed to stop the spread of the Oni Agent. The biological weapon continues to wreak havoc. Those that are infected become abominations known as Skulls, a fate worse than death.

Captain Dominic Holland and Meredith Webb have made it to Fort Detrick. The Army base was once a bastion for America’s biodefense. Now, swarms of hungry Skulls prowl outside the walls. With Fort Detrick’s resources, Dom and Meredith think they may finally have a chance to to slow the spread of the Oni Agent.

But with the United States military in disarray, the situation outside Detrick’s walls grows bleaker. More and more civilians succumb to the Skulls—or become them. Dom leads a desperate mission to establish a safe zone for civilians fleeing the nightmarish creatures.

Despite this apocalyptic new world, Dom and the Hunters are determined to succeed. New threats and discoveries challenge them every step of the way. But they soon find potential help from an unlikely source…if they can survive long enough to receive it.

Check it out now on Amazon: http://amzn.to/1Qe7xGV

One thought on “The Tide: Breakwater”