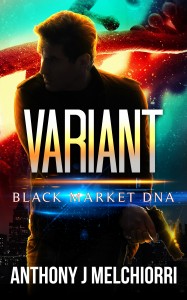 Chis Morgan is a talented genetic engineer with a complicated past. Dr. Robin Haynes is helping him move forward and make amends for his transgressions by developing a revolutionary gene therapy to help countless others. It doesn’t take long for him to believe that he has managed to rise above the criminal world of illegal biotechnology. Or so he thinks…

While treating a patient, Robin discovers a dangerous pathogen long-since thought to be eradicated. Her investigations lead to a startling and terrifying revelation. Now, Chris may be the only one that can help her uncover the truth.

A powerful adversary from Chris’s past has returned. The lives of thousands, maybe millions, are at stake.

They realize they are running out of time and recruit Baltimore PD Detective Ana Dellaporta to their side. Combining their investigative and scientific skills, Chris, Robin, and Ana confront one daunting challenge after the next. But will their determination be enough to save all those whose lives depend on them?