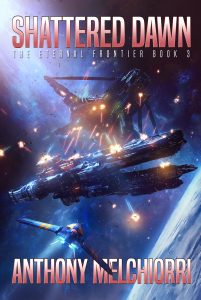 The Drone-masters are coming. Humanity is on the verge of extinction.
And Earth has no idea.

The fires of intergalactic war have given rise to an unexpected hero. Medical scientist by training and ship’s captain by circumstance, Tag Brewer leads a band of aliens, a few humans, and a synthetic lifeform into the deepest reaches of unexplored space. They may be all that stands between humanity and utter annihilation. It’s up to Tag’s crew to unveil the shroud of secrecy surrounding the Drone-masters.

He must destroy them before they destroy Earth.