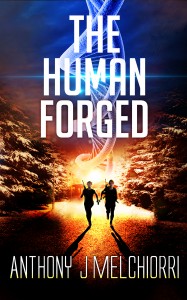 While on assignment in Estonia, former Army Specialist Nick Corrigan is abducted and finds himself at the whim of an unidentified paramilitary organization. He unwittingly becomes embroiled in a biotechnological nightmare and embarks on a dangerous adventure to return home. In order to survive, he’ll have to enlist the help of someone who shouldn’t even exist—his own clone.

Back in Washington, CIA analyst Sara Monahan makes a startling discovery while tracking the use of biological weapons in an ongoing war in Africa. She races to uncover a global conspiracy that may shake the very essence of what it means to be human.

THE HUMAN FORGED is a thought-provoking thriller packed with pulse-racing action, global medical conspiracies, and scientific intrigue. It raises frightening questions about a future that may be just around the corner.