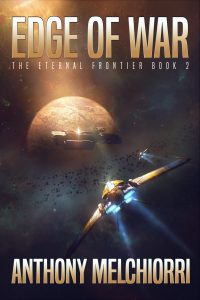 Humanity’s expansion into the stars has led to awe-inspiring discoveries—and terrifying new threats. An insidious alien race is waging an interstellar war, enslaving any civilization they encounter to carry out their galactic rampage. Now they have set their sights on mankind.

Tag Brewer is a medical scientist. Not a ship’s captain. But as humanity’s survival hangs in the balance, he must lead a ragtag crew of humans, a skeptical alien, and a synthetic lifeform into the depths of enemy territory. There he forms an uneasy alliance with a group of aliens—the Mechanics—fleeing from the destruction.

There is only one way to track down and stop their frightening new adversaries. Tag must follow the trail of devastation left behind in the fallen Mechanic empire. There he hopes to recruit other survivors to their cause. But what Tag and his crew find is far more dangerous than any of them thought possible.