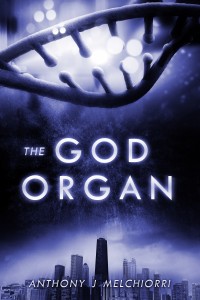 Immortality is within reach.

In 2063, a biotechnological revolution sweeps the nation. Behind this movement is Chicago-based medical giant LyfeGen. The company dominates the biotech industry with their Sustain, an implantable artificial organ designed to grant its recipients near-immortality. But many of those recipients are suddenly dying.

Biomedical scientist Preston Carter developed the Sustain to improve and save lives. Yet there are others that would see him fail. Extreme religious groups, radical movements, and competing corporations would prefer to see LyfeGen collapse rather than allow “the god organ” to fundamentally alter medicine and the human body. In a race against time, Carter must learn to trust resourceful journalist Audrey Cook. She may hold the key to discovering who is sabotaging the Sustain. And with the organ already implanted in his own body, Carter must uncover the truth before he’s killed by his invention.

THE GOD ORGAN is a near-future medical thriller that takes the reader on a suspenseful ride filled with sinister conspiracies, intriguing biomedical science, and rampant corruption that will leave readers wondering just how dangerous becoming a god may really be.