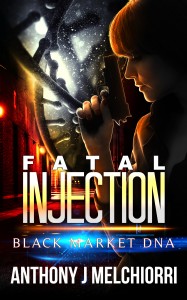 Baltimore’s streets are overrun with enhancers—people who inject themselves with illegally purchased genetic modifications to alter their bodies.

While on patrol in a rough neighborhood, Officer Ana Dellaporta discovers the bullet-riddled corpse of an enhancer and suspects a case of typical gang violence.

But when another enhancer is found terrorizing the locals, his body mutated by gene mods, Ana unearths an unsettling connection between him and the gunshot victim. She must unravel a sinister plot involving missing persons, murder, and genetic experimentation.

In the midst of the madness, one of Ana’s close friends goes missing. Now it’s personal and time is running out. She must uncover the gruesome truth before the trail goes cold and her friend becomes the next victim.