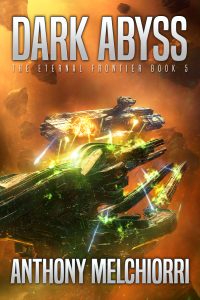 An unstoppable force is headed toward Earth with weapons far beyond humanity’s capabilities.

The Solar Republic of Earth faces imminent destruction at the hands of the maniacal Collectors. In a desperate bid to stop them, Commander Tag Brewer leads a strike group of SRE warships deep into enemy territory. They seek to strike a devastating blow and free the countless beings who have been enslaved by the Collectors. But Tag fears they may be headed into a trap.

Complicating their mission, they discover an alien race that may be even deadlier than the Collectors. Tag and his crew soon find themselves mired in a vicious conflict beyond anything they had anticipated.

And it is not just Tag and his strike group whose lives are in jeopardy. The outcome of this conflict will determine the fate of humanity and every other free race.

Tag must call on old and new allies if the SRE has any chance of survival in this thrilling conclusion to the Eternal Frontier series.