This past week, I had the opportunity to interview Mark E. Cooper, an author living in the south of England. A lifelong engineer, he recently made the jump into the world of words and turned his writing into a full-time endeavor. He’s the author of several series, perhaps most well-known for his Merkiaari Wars science fiction novels. You can get a taste of his science fiction work by downloading Hard Duty: Merkiaari Wars 1 or The God Decrees: Devan Chronicles 1 for fantasy. Both are free! You can find all of his works and more at his blog.

Check out my interview with Mark below!

You made the switch from long career in engineering to writing. What prompted you to make that decision? 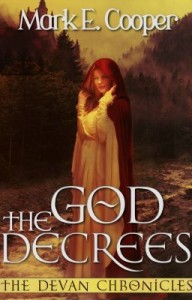 My first book, The God Decrees, came out in 2001 and at that time I didn’t consider writing as anything more than a fun thing to do in my off time, but I enjoyed it so much that one book quickly became four. This was in a time when POD was a relatively new technology. A few years prior to this I tried pitching the first book to agents and publishers, but nothing came of it. Most didn’t reply, and those who did said fantasy doesn’t sell well, and did I have anything else?

So fast forward to 2011 and Kindle arrives over here in the UK. In the US Kindle came along in 2007, but there was no way to enter that market for British authors. A friend noticed when this changed and told me about it. I was selling a few paperbacks on Amazon and a few ebooks on my website at that point. I had written a few more books but was very relaxed about it. I had stopped writing for a few years but the arrival of Kindle revitalized my interest and I released all my books through KDP Select.

In July of 2013 Fords decided to downsize. The company closed down my department and made its entire work force redundant. Luckily for me, I had by that time worked for them for 32 years and that gave me the option of taking a decent redundancy package. At this time, my Merkiaari Wars series was selling really well, but not enough to equal my engineering salary. I had to make a choice. Do I listen to my fears and find another job, or do I take the plunge by going full time? At 49 years of age I decided it was now or never. My heart said to go full time, economise, and live cheaply so that i could live on a low income but enjoy my (hopefully) stress free life. My head tried to put barriers in my way by telling me I wasn’t earning enough and I wouldn’t be able to pay my mortgage. So what to do? I pushed myself to release book 4 of Merkiaari Wars and a couple of box sets, as well as audio editions, all the while hoping those titles would push me over the line so that I could survive on my royalties alone. It worked out.

I think any life experiences will impact your writing. Has my engineering background had a particular effect though? I’m not sure it has affected the content but perhaps it has impacted the way I produce it. I like to have logical steps and structure to my work. When I write a book, I like to have three or four distinct parts, and each will have roughly the same number of chapters with each chapter roughly 4k words. Simple things like that might be attributed to my engineering. We like symmetry. The impact upon my work at Ford I would say was minimal to not existent, except in the way I used to write on a handheld Psion 5mx at every opportunity while at work during break times. I used to read voraciously at work. Probably my first twenty years at Ford would see me consuming four books a week, but then writing took my attention away from reading more and more. So no, I don’t think it affected my work except it made me dream and wish for something different.

Your works span from paranormal thrillers to space traveling science fiction and adventurous swords and sorcery fantasy. What makes you compelled to write in those genres? Any new genres that you plan to try out? 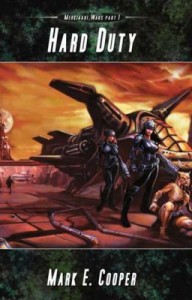 Everyone in the industry says genre hopping is a bad idea. It’s true in some ways but in others I have found it beneficial. I believe it keeps my ideas fresh when I take a break from sci fi to write a paranormal book or a fantasy. There is limited cross over but there is some. Some fans enjoy all four of my series while others stick to one. I’m best known for the Merkiaari Wars series but I don’t feel that I should be restricted to the space opera genre. I write books that I would like to read myself. Write what you love is an axiom I embrace wholeheartedly.

I have grown up reading science fiction, fantasy, and paranormal books from many great authors. I’m heavily influenced by my past enjoyment of American authors and Hollywood films that I grew up with. I don’t have plans to try a new genre, but I do have ideas for more books in my current series and another sci fi series I call Syadina. If I were to choose yet another genre to write in, it would definitely be steampunk. I love books like The Magnificent Devices Series by Shelley Adina, or the Bannon and Claire Series by Lilith Saintcrow.

I understand you have an upcoming title Chosen, the second book in your Rune Gate Cycle series. Can you tell us a little about that book?

So Chosen is about three quarters finished. It follows on from book one called Rune Gate and follows Alex Yorke through a portal to another world. Alex is a clairvoyant who has been helping the police to catch serial killers, but her latest case leads her to learn that other worlds are real and that not all serial killers are home grown. Chosen is a sequel, so it won’t stand alone at all. It begins almost from the moment the previous book ends. I have only two books planned, so Chosen completes the cycle.

Thanks you so much for taking the time out of your day to answer a few questions. Is there anything else you’d like myself or readers out there to know about you or your works?

Audiobooks are my current passion. I  buy tons of them myself, especially now. The more I write the less time I seem to have for reading other authors. I am either editing, revising, or writing my own work. Sometimes I re read my previous books ready to continue a series. But audio lets me read in a different way. I often listened to one in my previous job on my ipod. Now I write in my office at home and play a book from my computer through my surround system, or I play music playlists.

Audiobooks are the big growth market right now, and because I was familiar with Audible from my own purchasing of sci fi and fantasy, I knew I wanted my books in audio as soon as possible. That finally happened in February 2014 when Hard Duty: Merkiaari Wars 1 arrived at Audible and iTunes. The others in the series are available too now. My narrator, Mikael Narramore, is working upon all my other books with the aim of releasing them over the rest of this year.

One bonus question:  As a car enthusiast myself, I’d love to know – and I know a couple of my readers that would also like to know – the story behind the V12 Shelby Cobra you built. Can you tell us what made you decide to go with the Cobra. And, most importantly, is it a clean and pretty show car or do you drive the snot out of it?

This came about when my best friend and I got hooked on the TV series Miami Vice. We became best friends while apprentices together and attending college in the same classes. In that show, the main character, Crockett, drove around in a Ferrari 365GTB roadster. Surprisingly it was black not the red we all associate with Ferrari. Anyway, we were interested in all things Miami Vice and learned that the car used in the show was a replica. We looked into it and found a company over here in the Uk that produced the Ferrari and Shelby replicas.

One thing led to another and we decided to try building the Ferrari ourselves. The real Ferrari is an awesome V12 machine. The replica was based upon the V12 Jaguar XJ12. We successfully built that car and were very proud of it. It cost us a lot of money back then (about 23 years ago), but two of us working upon it on weekends for two years, and sharing costs… it worked out. Then one day we had an accident on the road and our pride and joy became a wreck in a matter of moments. Luckily no one was injured.

So we had a £24,000 pile of scrap (and back in early 90s that was a lot of money) and the insurance company wasn’t sympathetic. They basically stiffed us by paying out only half its value, but they “kindly” said we could keep the car. Well that turned out to be a blessing in disguise because although the car was destroyed, the damage was really the body and chassis not the mechanics, and a lot of the money was in the engine, gearbox, suspension parts, carburation etc. All that could be salvaged.

By this time we h 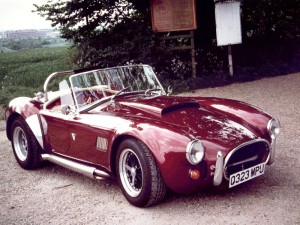 ad moved on in our interests. We would frequent car shows and visit various kit car factories and companies. There were a lot of interesting start-ups back then creating designs and quite a few Shelby replicas. Cobras were very popular around that time with some turbo or supercharged monsters. It was an exciting time in the industry. One thing led to another and we narrowed down our next car to a DAX GT40 replica or a DAX Tojiero Cobra replica. We chose the Cobra because DAX offered a V12 variant of their excellent V8 racing chassis, and we had all our V12 parts salvaged and ready to use. We chose the supertube chassis not to race, but for better handling and weight savings. The V12 is a very big and heavy engine. Using the supertube chassis meant we could keep the weight down to around 900kgs, and with a power output of over 350bhp that made a huge difference to performance.

It’s about 24 years old now and we stopped using it at kit car and other car shows. We never displayed it for prizes on the concourse or anything, but we were members of the cobra replica club here in the UK and so we would park it in the members area with all the others for the public to view. Nowadays the car spends most of its time in my garage. It’s still like new because we rarely take it out, but yes, when we do it’s a blast. It is still the fastest car I have ever driven 0-60 in under 4 seconds. Top speed is 160mph but I wouldn’t dare drive it that fast. Being open top and old fashioned in design, the wind buffeting is severe.